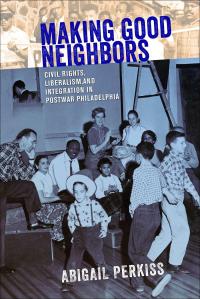 “Abigail Perkiss’s writing is fluid and engaging, and Making Good Neighbors is gripping. Perkiss uses research in archives and the secondary literature to strong effect and has written a book that will be of interest in African American and urban history.”—James Wolfinger, DePaul University, author of Philadelphia Divided: Race and Politics in the City of Brotherly Love

In the 1950s and 1960s, as the white residents, real estate agents, and municipal officials of many American cities fought to keep African Americans out of traditionally white neighborhoods, Philadelphia’s West Mount Airy became one of the first neighborhoods in the nation where residents came together around a community-wide mission toward intentional integration. As West Mount Airy experienced transition, homeowners fought economic and legal policies that encouraged white flight and threatened the quality of local schools, seeking to find an alternative to racial separation without knowing what they would create in its place. In Making Good Neighbors, Abigail Perkiss tells the remarkable story of West Mount Airy, drawing on archival research and her oral history interviews with residents to trace their efforts, which began in the years following World War II and continued through the turn of the twenty-first century.

The organizing principles of neighborhood groups like the West Mount Airy Neighbors Association (WMAN) were fundamentally liberal and emphasized democracy, equality, and justice; the social, cultural, and economic values of these groups were also decidedly grounded in middle-class ideals and white-collar professionalism. As Perkiss shows, this liberal, middle-class framework would ultimately become contested by more militant black activists and from within WMAN itself, as community leaders worked to adapt and respond to the changing racial landscape of the 1960s and 1970s. The West Mount Airy case stands apart from other experiments in integration because of the intentional, organized, and long-term commitment on the part of WMAN to biracial integration and, in time, multiracial and multiethnic diversity. The efforts of residents in the 1950s and 1960s helped to define the neighborhood as it exists today.

“In Making Good Neighbors, Abigail Perkiss describes the creation of an interracial urban neighborhood during the civil rights, racial power, and post–civil rights eras. The basic history of West Mount Airy is known to many people across the United States and particularly in the Philadelphia region. What most people do not know, and what Perkiss presents here in rich detail, are the nuances and knotty complications that characterized the inception and development of an intentionally integrated neighborhood. In clear and often forceful prose, she offers a highly readable study of an important neighborhood in an important city.”—Phyllis Palmer, The George Washington University, author of Living as Equals: How Three White Communities Struggled to Make Interracial Connections during the Civil Rights Era